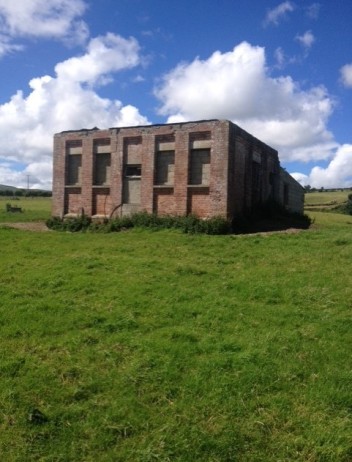 A familiar landmark on the Moville – Derry road at Ture, picture shows the bath-house, the last remaining structure of the US seaplane base. On the opposite side of the road, there is a vast concrete apron of about 2 acres and  a small cement jetty, where sea planes were taken ashore. There was no runaway as planes landed on the water supported by floats. The reinforced concrete has survived many storms in the Foyle over the last 100 years. The apron is now in private ownership and at the time of writing is up for sale.

In January 1915 German U-boats became active along the Irish coast and the Royal Navy and the US Navy joined forces to respond immediately by building seaplane bases, including Ture. There were also 5 airship bases including one at Ballyliffin, of which little trace now remains.A number of successful attacks on U-boats were reported from the Ture base but when the war ended in 1918, the base was no longer used. For the last 2 years of the war, the Ture base housed hundreds of American servicemen. Many were boarded in local houses around Ture while others travelled daily from the city. Press reports stated that as many as 15 sea base workers had accommodation in some local houses so it was a boom period for the local economy, however short-lived. Among the men who built the base were several Carrowmena men, including Jim Beatty, who later became a Garda in 1922. They cycled the 15 miles to work at Ture and I often heard him talk about his time at the airbase.

The base had a picture house, a canteen, prayer room, a dance hall, games rooms, a deep well, a bath house and cook house. Letters have become available from US service men who worked there and these will throw new light on this unique episode in Inishowen’s aviation history as we approach the centenary of the base.

Nearer Moville, there is the  American hospital and doctor’s lodge, now converted into a private residence. I recall visiting it in the 1970s before the conversion. As the war ended in 1918 it never housed any patients. It is not visible from the road and access is not open to the public.

In the 1930s there was great excitement as sea planes appeared again flying in formation up Lough Foyle when Gen. Balbo visited Derry. At that time, Derry Corporation was planning to build a new base on the opposite side of the Foyle but the plans fell through. As Ryanair announces its winter schedule from City of Derry Airport, it is good to recall the early days of aviation along Lough Foyle. Ryanair chief executive Michael O’Leary is not the first to recognise the potential of the region  and its role in Irish aviation history over a century ago. Today, it is time to recognise that the Ture seaplane base  is an important war site as we commemorate the centenary of WW1. Ireland played a key role in terms of training, combat operations and aircraft production in the war and Ture and Ballyliffin played their part.
Compiled by Sean Beattie with thanks to the owners of the sites for their permission to inspect the locations on their property; their courtesy is greatly appreciated and many thanks also for useful information when I called recently.