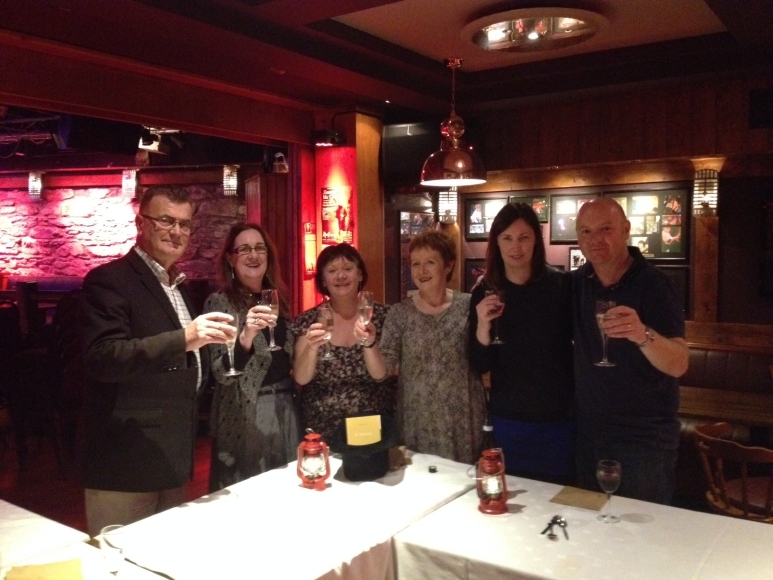 Charles Macklin Autumn School committee in celebratory mood in McGrorys, Culdaff, after final session of 25th Festival on Sunday 12 October 2014. Picture shows S. Beattie, A McDaid, A. McCartney, A. Doherty, Rosin and Neal McGrory. Rosiin played at the first Festival in 1990 (she was a school girl) and Neal has done the sound for 25 years on a pro bono basis.Their two daughters sung songs and played music at the opening and closing event.  Almost 1,000 visitors visited the village during the Festival (population normally 200). Visitors came from USA, UK, Greece, Germany, Holland, France and Canada and all over Ireland. Brian Friel (who is 86 in January) is Patron and attended the opening and has rarely missed a year since he opened the first Festival in 1990. Highlights this year were the Henry Girls, who first played here in 1999, Siobhan Shiels with her new band, lectures on ring-fort monasteries, visit to Cooley site, talks by Des Kavanagh on Seamus Heaney and by Nollaig McCongaile on Roger Casement in Clonmany. Dan and Hugh Heaney, brothers of poet, attended with their wives. Other events included storytelling, pub drama, art exhibition and book show. Thanks to our visitors who joined in the activities and have supported our humble voluntary efforts over the years.  Many thanks to our speakers and musicians who entertained us over 3 great days. Macklin has a plaque in the church in Covent Garden, London and  a portrait hangs in the Garrick Club. He has not gone away you know – his ghost is still active in one of the great London theatres and people still talk about him in Culdaff.

One Reply to “Macklin Festival at Culdaff celebrates 25 great years”