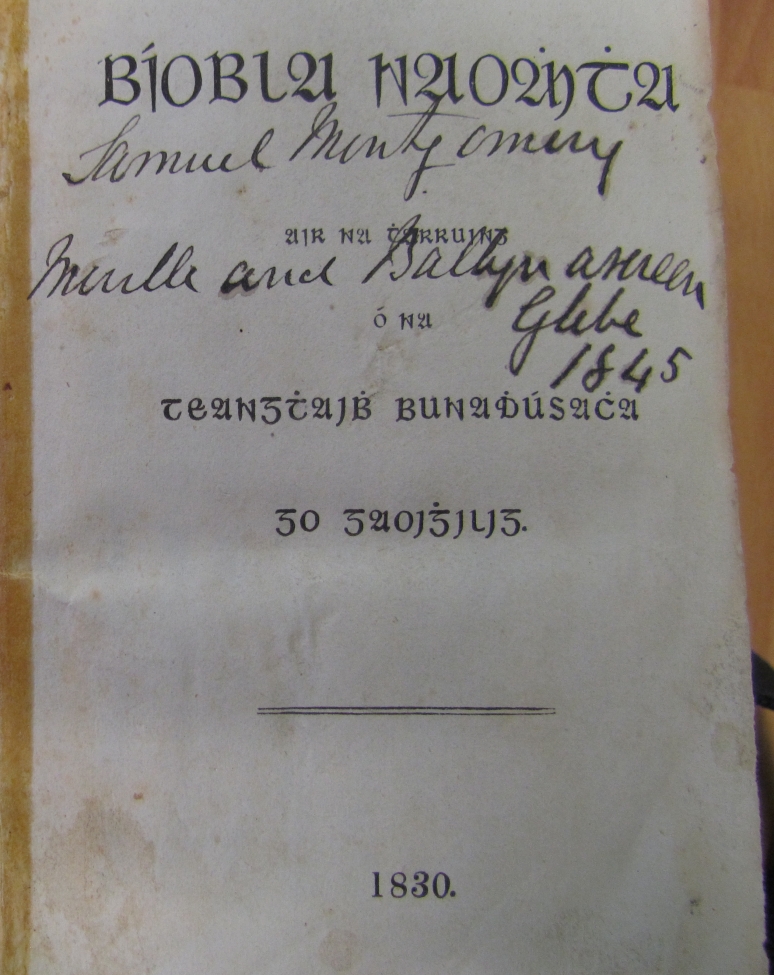 Rev Samuel Montgomery was an uncle of Field Marshal Montgomery of Alamein. The family lived at New Park, Moville and the house is still standing beside the Protestant Church but the short path linking church and rectory no longer exists. Generations of the Montgomerys carved their names on the tree outside the main door and this tree was felled to make way for a small housing development. The tree-lined road leading to the rectory has been widened while the former Montgomery homestead  is undergoing repairs. Bishop Montgomery, father of the Field Marshal, prayed in an upstairs oratory, overlooking Lough Foyle. He took a daily stroll from the house to the Square in Moville and visited his neighbours on occasions. Much of the furniture in New Park found its way into homes in Inishowen following an auction of the house contents after Mrs Montgomery died. A black carved cabinet once stood in the hallway of Falmore House, Gleneely and I recall seeing it before the latter was destroyed by fire. Many of the books  in the library found their way to a house in Ballyharry in Culdaff parish. They were taken there by donkey and cart after the auction.

I located the Bible in the archives of Foyle College, Derry with the assistance of the Archivist, Dr. Robert Montgomery of Castlerock, Co Derry and Sean McMahon, a noted Derry author who wrote the history of the college. Members of the Montgomery family attended Foyle College in Derry.

Rev. Samuel Montgomery (1805-1874) was the uncle of Field Marshal Montgomery. At the time of Samuel’s birth, Irish was an everyday language  in Moville and English was rarely heard. Rev Montgomery was fluent in Irish and his Gaelic Bible shows signs that it was constantly in use and not locked away in a library.  He went to Co Derry as a young clergyman; he served as rector of Ballinascreen for 30 years and died at the age of 69. His loyal servant and coachman, John Wilson, is buried at the foot of his grave. Samuel never married and lived with his two sisters. The date of the Bible is significant. In 1845, Rev Montgomery wrote, referring to Co Derry: “The whole atmosphere in September was tainted with the odour of decaying potatoes.” (See John Withington, DISASTERS – A HISTORY OF EARTHQUAKES AND OTHER CATASTROPHES, USA, 1947). He did not forget his former neighbours in Moville at this desperate time. He contributed £10 to the Moville Relief Committee, of which Rev Charles Galwey was secretary. (See DONEGAL ANNUAL  1980, “Workhouse and Famine : Inishowen 1845-1849”, by Sean Beattie). Referring to cottiers and fishermen, Rev Galwey wrote – “Destitution to an alarming extent exists”.

The descendants of Field Marshal Montgomery visited Inishowen recently for a short holiday. They stayed in Culdaff and visited Moville and New Park, which was undergoing renovations. A plaque on Moville Green states that Bishop Montgomery donated the lands that now form the Green to Donegal County Council for public use. Montgomery Terrace is a reminder of the family association with the town. (See Brian Montgomery, A FIELD MARSHAL IN THE FAMILY, London, 1973).